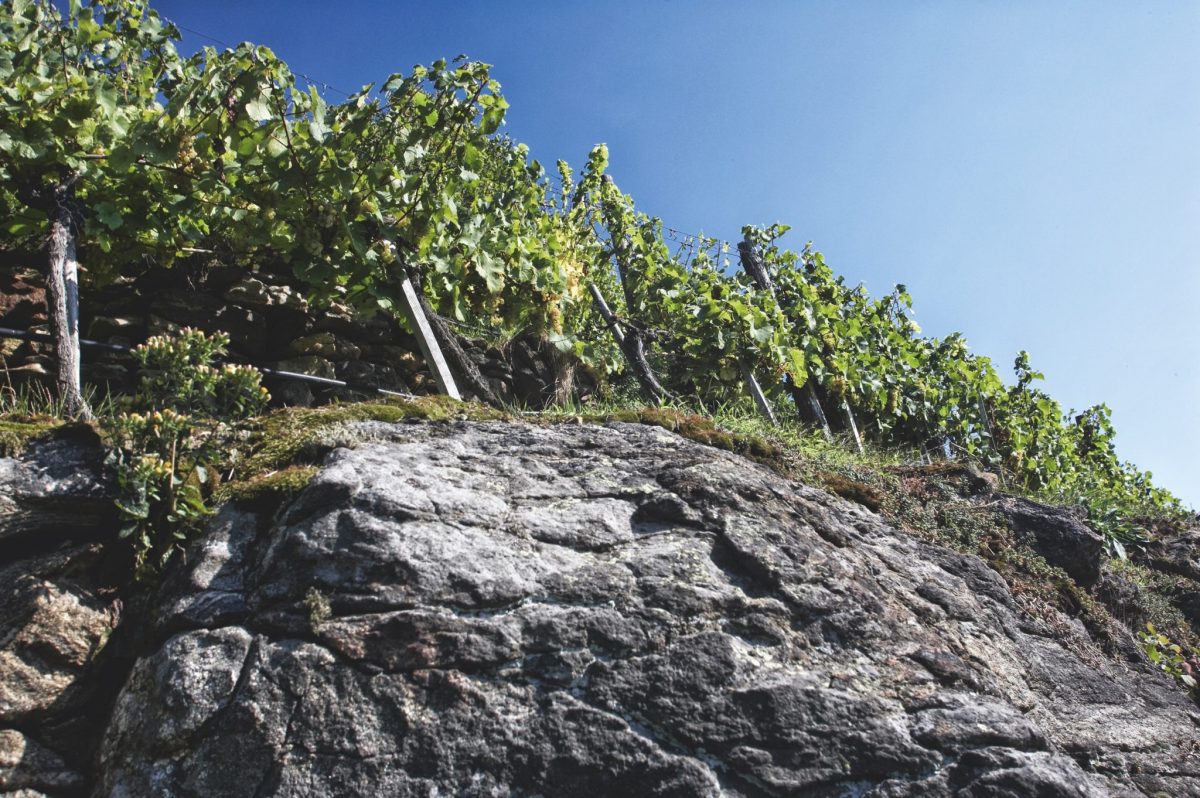 The oldest parent rock of our soils was moulded during the Variscan orogeny, as the seabed of the Rheic Ocean rose upward to become a mountain range, transformed during a period of geologic upheaval some 300–370 million years ago. Weathering and erosion have worn down the roots of these mountains into the undulating hills of the Bohemian Massif, and just a few million years ago cut the Danube River deeply through the Wachau.

During the most recent ice age, from 110,000–14,000 years ago, loess was deposited from outwash plains and tundra, drifting in from the eastern side, while sites near the Danube River are composed from more recently accumulated river sediments. One also encounters locally isolated alluvial deposits left by the Tethys Sea, the precursor to today’s Mediterranean.

The soils of Ried Kollmütz developed out of the Wösendorf Slide Mass, from severely weathered crystalline rock called paragneiss. Paragneiss was formed from metamorphosed sediments, created under extreme conditions of increased pressure and heat during the Variscan orogeny, becoming exposed once more after extensive erosion of the erstwhile mountain range. The paragneisses of the Wachau are several hundred million years old and are distinguished by their multifacetted mineral constituents.

The slumping process of the slide mass itself is dated by geologists to the Egerian Period (ca. 20–25 million years ago). The sandy and calcareous soils of the Kollmütz are particularly rich in iron, manganese and magnesium.

Before construction of the village church, residents of Wösendorf were obliged to walk along the Kirchweg, the churchpath, to nearby Sankt Michael. Ried Kirchweg lies just north of the path, where the vineyard borders on the Hochrain, and was known early-on for producing particularly good results with Riesling on the higher-situated Wösendorf side.

The reason for this is a small tributary stream, which during heavy rainfalls has blanketed the Danube sediments with sand and coarsely grained streambed stones, creating a gently sloping alluvial fan. Next to the westerly Achleithen, the Kirchweg soils display the least concentration of carbonates in their subsoil. The lower-lying side closer to St. Michael is composed of Danube sediments and reserved for the Grüner Veltliner.

The Wachau remained free of ice during the major glacial periods. Persistent west winds deposited massive layers of loess, above all on the downwind eastern side, which today provides the subsoil for Ried Hochrain. Wachau loess drifted in above all during the most recent glaciation, the Würm Ice Age, which ended some 14,000 years ago.

Loess is especially characterised by a high concentration of calcareous silt, a grain-sized soil group between sand and clay, handily redistributed by the wind. Depending upon the degree of decomposition present in the loess, it will form soils of light to medium density.

The soils of the higher-elevation, steeply inclined parcel Hochrain-Ralais offer an impressive contrast to the loess soils at the foot of the slope, with respect to their geologic/pedologic contrasts in subsoil.

Here the dominant feature is paragneiss with a far lesser degree of weathering than is the case with the Wösendorf Slide Mass of the Kollmütz. The soils, colluvially relocated shallow regosols, display a very sandy texture and are virtually free of carbonates.

The soils in the idyllically situated westerly Achleithen consist of a blend of sandy fine earth with coarse scree and stone, mixed with Gföhler gneiss and migmatitic amphibolite. Of all our vineyard sites, the westerly Achleithen manifests the least limestone content. Great portions of it are even limestone-free, where the pH value of the soil turns out correspondingly lower. In the higher elevation parcels, soils are dominated by Gföhler gneiss, while migmatitic amphibolite prevails in the lower levels. Because of landslides, both types of stone appear in the lower parcels.
The typical Gföhler gneiss is a migmatitic orthogneiss, a metamorphic rock that is formed when granite is subjected to extreme conditions of pressure and temperature. The granite itself was formed thanks to a gradual cooling of acidic molten stone some 480 million years in the past.

Over the course of the Variscian ontogeny, 350 million years ago, the stone was transformed into so-called migmatitic granite gneiss. The migmatitic amphibolite in the lower vineyard parcels is a metamorphic rock as well, one which underwent a partial melting. The name refers to the high concentration of the alkaline mineral hornblende, the most frequently encountered representative of the amphibolite group.